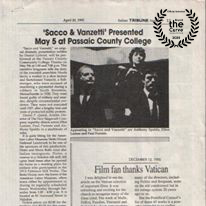 Your film: SACCO & VANZETTI: BURN ! was a Finalist as an ‘official selection’ by Beyond the Curve International Film Festival, Paris, FRANCE, December 2020.

EINPresswire.com/ — We are delighted to announce that your film:
SACCO & VANZETTI: BURN ! has been named a Finalist for BCIFF in Paris. SACCO & VANZETTI was awarded ‘official selection’ by our esteemed jury panel. We have especially curated a section with your film on our website. We, the BCIFF team, are extremely happy to have your project selected as ‘official selection’ in our festival. We extend heartiest congratulations to the entire team. Well, we guess some celebrations are in order.

Please practice social distancing while celebrating today, we need you healthy as we believe there is so much more cinema that the world and especially us can experience and learn from you. Thanks!

Join us as we take a step back in our history of SACCO & VANZETTI (1920-2020) from the premiere Off-Broadway and beyond. (1983-1995). Venues included Castillo Theatre; Foundation (Burlington County College); Garibaldi-Meucci Museum, Staten Island; The Botto House, Haledon, The Williams Center, Rutherford, and a new programs at Italian -American Museum and on Cyber Space in 2020.

WHEREAS: A half century ago next month, Nicola Sacco and Bartolomeo Vanzetti were executed by the Commonwealth of Massachusetts after being indicted, tried, and found guilty of murdering Alessandro Berardelli and Frederick A. Parmenter; and

WHEREAS: Nicola Sacco and Bartolomeo Vanzetti were Italian immigrants who lived and worked in Massachusetts while openly professing their beliefs in the doctrines of anarchism; and

WHEREAS: The atmosphere of their trial and appeals was permeated by prejudice against foreigners and hostility toward unorthodox political views; and

WHEREAS: The conduct of many of the officials involved in the case shed serious doubt on their willingness and ability to conduct the prosecution and trial of Sacco and Vanzetti fairly and impartially; and

WHEREAS: The limited scope of appellate review then in effect did not allow a new trial to be ordered based on the prejudicial effect of the proceedings as a whole; and

WHEREAS: This situation was later rectified as a direct result of their case by the adoption of Chapter 341 of the Acts of 1939, which permitted the Massachusetts Supreme Judicial Court to order a new trial not merely because the verdict was contrary to the law, but also if it was against the weight of the evidence, contradicted by newly discovered evidence, or “for any other reason that justice may require”; and

WHEREAS: The people of Massachusetts today take pride in the strength and vitality of their governmental institutions, particularly in the high quality of their legal system; and

WHEREAS: They recognize that all human institutions are imperfect, that the possibility of injustice is ever-present, and that the acknowledgement of fault, combined with a resolve to do better, are signs of strength in a free society; and

WHEREAS: The trial and execution of Sacco and Vanzetti should serve to remind all civilized people of the constant need to guard against our susceptibility to prejudice, our intolerance of unorthodox ideas, and our failure to defend the rights of persons who are looked upon as strangers in our midst; and

WHEREAS: Simple decency and compassion, as well as respect for truth and an enduring commitment to our nations highest ideals, require that the fate of Nicola Sacco and Bartolomeo Vanzetti be-pondered by all who cherish tolerance, justice and human understanding; and

WHEREAS: Tuesday, August 23, 1977, will mark the fiftieth anniversary of the execution of Nicola Sacco and Bartolomeo Vanzetti by the Commonwealth of Massachusetts;

Given at the Executive Chamber in Boston, this nineteenth day of July in the year of our Lord nineteen hundred and seventy-seven and of the independence of the United States of America the two hundred and first.

GOD SAVE THE COMMONWEALTH OF MASSACHUSETTS

This site uses Akismet to reduce spam. Learn how your comment data is processed.